Covid, Healthcare, Employment and the 2020 Recession

July 30, 2020
We are on the front lines at Suzie Health Solutions. When someone loses their job and needs healthcare then they come to us. We have been helping people with little or no money sign up for healthcare since 2013. We literally have our finger on the pulse of the economy and healthcare. We started seeing businesses adjust their income last fall. We knew that it was going to be rough because hard news is not the easiest to look at.

Well how did we get here?

We were in trouble before Covid got a strong hold in the United States.

1. Our country's pandemic response was disassembled from the very beginning of the current administration. On Jan 13,2017, the Joint Obama-Trump transition team goes through a series of pandemic-scenarios. Most of the individuals are no longer with the administration. Funding and personnel are cut to key areas.

2. It has been politicized by the administration. Trump's tweets were bad and his rally's worse. As his attacks on science and government organizations have not gone unnoticed. It has fueled anti-science to dangerous levels in the United States. As Paul Krugman, a New York Times columnist put's it, "And this rejection of expertise, science and responsibility in general is killing us.

2. We entered it officially in February and it will be long if we don't have a decent response. The National Bureau of Economic Research define a recession as a GDP decline in back to back quarters. The peak marks the end of the expansion that began in June 2009 and the beginning of a recession. The expansion lasted 128 months, the longest in the history of U.S. business cycles dating back to 1854.  Job losses since February have created a hole much deeper than in the Great Recession, and CBO projects that both GDP and employment will remain below their levels at the end of 2019 for several years if current laws generally remain unchanged and no significant additional emergency funding is provided.

3. A mixed response by the politicians. The Democratic House passed their relief bill in May to attempt to improve the economy. They have also passed Healthcare, Housing and Infrastructure bills in May to improve the situation. The Republicans which control the Whitehouse and Senate just started their response. It is a rocky start since it included $1.75 billion for a new FBI Headquarters near Trump's hotel at his request to protect his interest.

1. We are dying and we don't have to be. Americans are dying about one a minute. It is the highest since spring when we were locked down to slow down the spread. We just passed another milestone of 150,000 recorded Covid-19 deaths. We have 25% of the worlds deaths and only make up 4% of the population. There are plenty of good examples of countries that vigorously combated COVID to slow the spread, reduce the deaths and not destroy their economy.

Texas is a good example of opening early. The started using death panels to send people home because they are out of room. 85 babies in a county have been infected with COVID. Texas Governor Gregg Abbott has even expressed regret on how he opened his state. 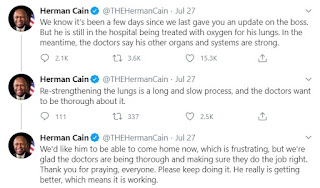 By ignoring the experts, Herman Cain dies of COVID. This is after the Tulsa Rally, without a mask, as a high risk individual. As a leader, we are responsible for the people around us. His death is a sad punctuation of his life by ignoring experts because he wanted to continue a political divide in our nation. His team tweeting days up until he died how better he was getting.

2. Worst economic report ever. Despite opening early for the economy, April, May and June we shrank 32.9%. The record was 10% in 1958.  Even before the extended unemployment benefits end, Washington state poverty level jumped from 8% to 11%.


3. While it may be a while before we get a vaccine, however there are two studies to enroll 30,000 people to determine if the vaccine are safe. There are steps that you can take to protect yourself:


If you need healthcare then grab an appointment now.

We will either get you started or prepare you for this fall's open enrollment. Do not wait for the last minute. We have seen people attempt and fail at getting healthcare the day before an operation. We don't charge fees.

4. Do not be a participant of sharing viral videos or opinion  pieces with bad information. A political group promoted a group called America's Frontline Doctors which was banned from social media.  This is just another in a long string of bad to share videos about Covid. Remember the 2 doctors or 'Plandemic'? We had a local clinic talk about Covid being behind us at the end of May. These "unique" findings are further dividing our communities.

We do our best to cross check information on our facebook page, Youtube , or Podcast. Matt has been working with Healthcare information since 2013 and cross checks his information. He literally told a gym owner to steal from Matt because he shared a bad video to his friends and students. Double check before you share.

Popular posts from this blog

April 15, 2020
Enrollment Centers in Washington State are unique as people are able to get help with out extra charges.

As a bonus, the broker partners may provide additional assistance with additional insurance products such as Medicare, Supplemental and Life Insurance products so ask. At Wenatchee, we upload documents, notarize and do our best to assist our clients in effectively using healthcare.

November 09, 2019
Open Enrollment is November 1st through December 15th. Outside of that time frame, it requires a special documented reason.


We have been helping people enroll into plans on the Washington Healthplanfinder with out charging fees since the first Open Enrollment. Insurance is expensive and complicated. Not everyone has been trained by the Insurance Companies how their plans function nor went through the education and licensing for a Insurance Producer in Washington State.

Just as last year, there are a lot of little or no cost plans available. When I say a lot I mean that the people in charge of Healthcare.com (Centers for Medicare and Medicaid Services) put out a report stating 2/3 will be able to purchase a plan for $10 or less. An analysis Thursday from the consulting firm Avalere Health found that low-income residents in 96% of counties served by HealthCare.gov can find a basic "bronze" plan at no cost to them, factoring in subsidies. Bronze plans are skimpy, but experts sa…
Post a Comment
Read more

January 16, 2020
Hey, this is the 3rd year that we have been the Full Services Enrollment Center for the Washington Healthplanfinder. We don't charge a bunch of fees and you get access to extra services. Since it is tax season then you should know we help with 1095 Forms! Yes, we will print one out for you at our office if we are connected to your account.

Tax season is officially from January 27th to April 15, 2020. If you receive tax credits or Washington Apple Health then you need to file your taxes with the IRS. If it is not filed or filed incorrectly then the Healthcare Authority can revoke the tax credits. Yes, I have heard from more than one person that thought that they were saving money by not filing which created massive problems. The worst problems that I heard was they went the next year without healthcare!


If you are a tax professional then let me know and I will add you to this list. A person can be a paid tax return preparer as long as they have an IRS Preparer Tax Identification N…
Post a Comment
Read more